New publication by Sona Grigoryan, Neither Belief nor Unbelief 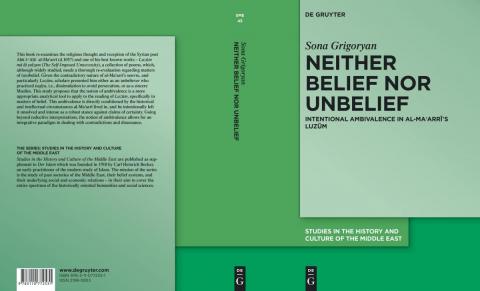 The book re-examines the religious thought and receptions of the Syrian poet Abū l-ʿAlāʾ al-Maʿarrī (d.1057) and one of his best known works - Luzūm mā lā yalzam (The Self-Imposed Unnecessity), a collection of poems, which, although widely studied, needs a thorough re-evaluation regarding matters of (un)belief. Given the contradictory nature of al-Maʿarrī's oeuvre and Luzūm in particular, there have been two major trends in assessing al-Maʿarrī's religious thought in modern scholarship. One presented al-Maʿarrī as an unbeliever and a freethinker arguing that through contradictions, he practiced taqīya, i.e., dissimulation in order to avoid persecution. The other, often apologetically, presented al-Maʿarrī as a sincere Muslim. This study proposes that the notion of ambivalence is a more appropriate analytical tool to apply to the reading of Luzūm, specifically in matters of belief. This ambivalence is directly conditioned by the historical and intellectual circumstances al-Maʿarrī lived in and he intentionally left it unsolved and intense as a robust stance against claims of certainty. Going beyond reductive interpretations, the notion of ambivalence allows for an integrative paradigm in dealing with contradictions and dissonance.

We congratulate Sona on her book.