Sritē means “manuscripts” in Syriac. The original aim of this project was to survey, digitize, and catalogue the manuscript collections of the Saint Thomas Christian community of South India, to lay the foundations for a new history of the community. The native Christians are called “the Christians of Saint Thomas” because, according to their traditions, their ancestors were converted by Saint Thomas the Apostle, whose missionary itinerary brought him as far as South India, where he suffered a martyr’s death. Another name for the community is “Mappilla Christians.” The word māppiḷḷa means the “son of the maternal uncle” and, thus, the ideal bridegroom for the matrilineal exogamous castes of the Kerala Hindu society. This designation shows that the Mappilla communities were formed through the intermarriage of West Asian merchants and women of the local matrilineal castes, eminently the Nayars, which was the land-tenant and warrior caste of Kerala. They are also called “Syrians” (Suriyāni) because of their liturgical and literary language, Syriac, although their mother tongue is Malayalam, shared with the neighbouring Hindu, Jewish, and Muslim communities. 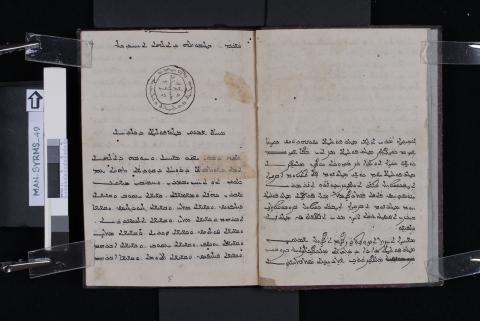 Two pages from MS Mannanam Syr 49: on the left - a Syriac text; on the right a Garshuni Malayalam text

The Background of the Project

The project was launched to explore the manuscript archives of the Syrian/Mappila Christians of India, who are a community that settled in India or was converted to Christianity as early as in Late Antiquity. This community, together with their Jewish and Muslim counterparts, played a key role in the spice trade connecting India to West Asia and the Mediterranean. As the manuscript archives of the community were partly unknown and partly in abominable condition, and as their history is shrouded in legends, the original aim of the project was first, to initiate the digital and material preservation of the manuscripts and then, to uncover hard evidence on the history of the community and to found a new discipline: the evidence-based historical study of the Mappila Christians.

Even before this project started, the Kerala ecclesiastical collections had acquired the reputation of preserving valuable copies of well-known Syriac texts from the Middle East whose originals had become difficult if not impossible to access because of tensions and unsafe conditions in western Asia. The value of the Syriac archives as a source for the history of the Indian Syrian Christian community was virtually unknown.

The project was first funded intermittently by CEU from 2000 onwards, then by the Deutsche Forschungsgemeinschaft via the University of Tübingen between 2004 and 2009, and by the Hill Museum and Manuscript Library (HMML) continuously from 2007. Between 2015 and 2021 it became part of a collaborative project between Ruhr University, Bochum, Germany, and CEU funded by an ERC grant and directed by Alexandra Cuffel of Ruhr University: "Jews and Christians in the East: Strategies of Interaction between the Mediterranean and the Indian Ocean".[1]