30th Anniversary of the AIEA

CEMS is hosting the next AIEA General Conference with István Perczel in charge for the organization.

This conference will be of special significance since it will celebrate the 30th anniversary of the AIEA in 2011.

According to tradition there are no specific subjects prescribed for AIEA General Conferences and the present congress will be no exception to this tradition. However, a special session will be dedicated to the transmission of texts and ideas between the Armenian-, Greek-, Syriac-, Georgian-, Arabic- and Persian-speaking communities. Another session will focus on the current situation of Armenian and Caucasian studies in Eastern Europe; since the Congress will be held in Budapest,  this opportunity will be used to commemorate the great Hungarian Armenian scholar, the late Prof. Edmund Schütz. 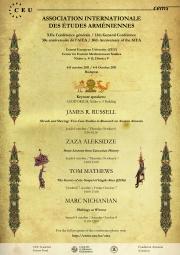